“I try to apply a punk ethic to my own music…it has to be groundbreaking, futuristic, unique, and organic.”

Grammy Award-winning recording artist Dubfire is renowned for his innovative DJ sets, revolutionary music, and much-lauded SCI+TEC label. Widely recognized as one of electronic music’s most versatile artists, Dubfire initially brought a pioneering sound to the masses during his days as one-half of the distinguished DJ & production duo Deep Dish, which led to a catalog of timeless dance classics and numerous international awards to their credit.

Dubfire has always been a risk taker, and his decision to go solo in 2006 at the height
of Deep Dish’s success was a precarious one. But staying true to his convictions,
he created a visionary new style of “techno” that defied genres, crossing over into the hearts, minds and performances of the world’s leading tastemakers. The cadence of his early solo productions came in the form of a relentless string of releases, including “RibCage, “Roadkill, and “Emissions,” collaborations with Underworld and Oliver Huntemann, and the now-classic remix of Radio Slave’s ”Grindhouse” to name just a few. He has shown no signs of slowing the pace, with a host of originals, remixes and collaborations that have subsequently been released to great fanfare.

After more than 23 years behind the decks and in the studio, with deep roots in the genesis of electronic music, Dubfire continues to evolve in new ways that have helped shape the industry. 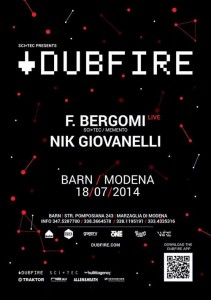