Since breaking onto the scene in 2013, Eli & Fur have been perfecting a sound built around infectious melodies and seductive vocal lines which have  mesmerized dance floors & radio waves from London to Los Angeles. Their captivating sets have seen the duo play alongside the likes of Maceo Plex, Hot Since 82, Kölsch and Seth Troxler. Appearing on line ups from Ants, Vagabundos, Bugged Out and Digital with their Festival highlights including Creamfields, Leeds Festival, Bestival and the ultimate of all festivals, Glastonbury.

The duo’s debut track, ‘You’re So High’ reached the top 3 on Hype Machine and has since picked up over 3 million plays. ‘Seeing is Believing’ saw the girls collaborate with Shadow Child and release on Defected, ‘Feel The Fire’ came on Anjunadeep and ‘Your Eyes’ saw the girls self-release on NYX Muisc and team up with Beatport in the first ever Artist Partnership on Beatport’s newly launched streaming platform. More recently Eli & Fur released the incredibly received ‘California Love’ EP which propelled them in the US and helped them gain their first ever performance on Coachella 2016.

2015 saw the rise and rise of Eli & Fur. Tipped by Beatport as 2015 Artists to Watch, they’e since been nominated for ‘Best Newcomer’ in The DJ Awards, ‘Best Producer’ in the Bass Music Awards, ‘Best Breakthrough DJ’ at DJ Magazine’s ‘Best of British’ and more recently ‘Best Breakthrough Artist’ in the 2016 IDMA Awards. Their productions have been heavily supported by the champion of dance music, Pete Tong, and the girls are set to unleash their next wave of releases and a series of collaborations which have seen them pair up with Dantiez Saunderson, Tâches, Erick Morillo, Santé and more.

Eli & Fur rolled out 2015 with a Thelma & Louise inspired tour through North America. Documenting every step of their 13 city tour on Go-Pro, taking planes, train, automobiles and boats, dropping into radio stations, studio sessions, TV networks and clubs. It was an unusual way to approach the US market but a life time dream inspired by quite possibly the two coolest chics ever to grace the big screen. The end result is the self-made video for California Love.

So with an impressive 2015 in the bag it looks like 2016 will be a year of continued success. 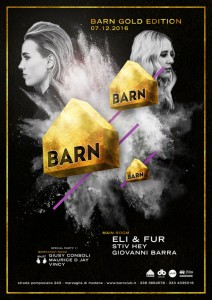