A collaboration between three of Paris underground’s hottest exports, 2012 saw the launch of Apollonia, the imprint and DJ outfit from Shonky, Dan Ghenacia and Dyed Soundorom.

Presenting a back2back2back spectaculaire, Apollonia DJ together for extended sets of five hours or more, following a strict one-record-each concept for the full duration of the show.

Bringing their trio performance to only the most infamous clubs and parties around the world, some of their favourite annual events include DC10 Ibiza, Panorama Bar Berlin, BPM Festival Playa Del Carmen and Fabric London, for whom they mixed fabric 70 of the renowned compilation series.

Having left Paris in recent years in favour of Berlin, winters are spent locked in studio sessions in Kreuzberg, while summer it’s off to the hotter shores of their beloved Ibiza. Maintaining a long-standing association with the island’s original underground party Circoloco and holding a strong affinity for DC10, it has been their club of choice for the once-a-season Apollonia ‘All Night Long’ showcase. Appearing at Richie Hawtin’s ENTER. for the first time in 2014, they mix the Space Terrace CD of the party’s summer compilation, as well as be given the coveted honour of opening Amnesia’s Terrace, one of the biggest events of the Ibiza calendar.

To date the trio have put out their debut EP on the label, but the anticipation for 2014 undoubtedly centres around their first album. Coming in Autumn, the forthcoming release is sure to be the highlight of the year and Apollonia’s career to date. 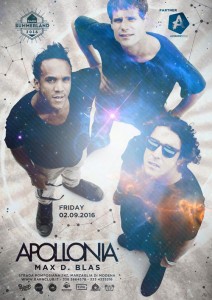