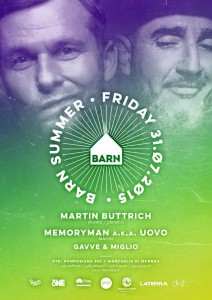 Electronic music producers are unique individuals with the skills, tools and ideas necessary to imagine, write and produce transcendent music. Some are more than just musicians through; they represent a way of life that embraces innovation, technology, and communion through sound. They share it, travel it and some simply live it. Argy, aka Argyris Theofilis, born of Rhodes, Greece, is one of these rare artists – perhaps even the epitome of this way of life. Utterly dedicated to his work, Argy’s passion bleeds through in everything he does, from interviews and conversations to creating deeply musical, yet strikingly state-of-the-art house music. Just 25 years old, the Berlin-based artist is already among the elite of the underground club scene. He seized the spotlight with the massive 2005 hit ‘Love Dose’, duly remixed and championed by Luciano, and hasn’t stopped since.

In the past five years Argy has worked with an impressive array of labels ranging from Sven Vath’s Cocoon and Dennis Ferrer’s Objektivity to classic house imprint Ibadan and even Defected. Always seeking to break down barriers, Argy’s studio collaborations and club events with New York DJs The Martinez Brothers have brought together audiences and sounds from formerly unconnected worlds, drawing inspiration from their mutual appreciation and friendship. This same spirit of collaboration is evident on Argy’s first full-length project ‘Focus on: Argy’, released on Poker Flat in 2008, where he works with fellow music luminaries such as Jerome Sydenham and DJ Gregory, creating a fusion of influences rarely witnessed in techno music. Two subsequent DJ mix compilations: ‘Cavo Paradiso 09: The Master Sessions’ and ‘D.Edge Sao Paolo’ on his own imprint, These Days, confirm that Argy’s output to date is only the tip of the iceberg. He has a rare talent for taking audiences on musical journeys they might never have imagined.
Argy developed his love affair with night-time culture as an teenager, thanks to memorable club experiences headed by the U.S. house scene‘s finest. Fascinated by the boldness and the power that the DJ could communicate, Argy dreamed of performing, using the concentration of the DJ to feed and fuel the response of the crowd. Fittingly, he has developed a unique style of mixing in key which allows him to combine everything and from classic techno to deep disco, weaving a sonic tapestry that defies easy categorization of genre or era.

This eclecticism carries over to his label These Days, which is an outlet for Argy’s relentless pursuit of artistic perfection. The imprint rose in 2009 and has since released music from Argy, DJ Duke, The Martinez Brothers, Stephen Brown, Radio Slave, Beat Pharmacy, Jerome Sydenham and more. In addition to production duties Argy does everything from A&R to artwork, determined to make the label an “up-to-date yet timeless” ideas platform.

”I could never be a music purist,” Argy says, “I find beauty in so many things.” Among his fascinations are architecture, current affairs, visual art (growing up in Greece, he planned to be a painter before he discovered clubbing) and music as varied as bossa nova, jazz, Krautrock, and African trance.

Emanating clarity and focus – on both a personal and musical level – rare for one of his years, Argy represents a new breed of far-sighted talent driving modern electronic dance music. He considers the future with confidence. “I was taught that there is nothing that you cannot do, and that if you love it you will do it well”, he says. And, as fans across the globe will testify, Argy does music very well indeed.