Two decks and a teenage homemade mixer – who would have thought a school project would launch the career of the fast-rising DJ/producer John Dimas!

Drawn to the sounds of Chicago, Acid and French House, he started collecting records from the likes of Derrick Carter, Chez Damier, Ron Trent and David Duriez, before honing his skills as a DJ in his native Thessaloniki. Quickly gaining a reputation for his unique sets using three turntables and his ear for digging out a hot, rare track, naturally the international club invites followed… Le Nuit Sonore Lyon, The Rainbow Birmingham, Watergate, Katerholzig , Chalet and Tresor in his new home of Berlin.

Moving into the studio, 2008 saw his first release as duo Actor One but more recently he has been focusing on his solo productions. Conjuring up solid house basslines with tech around the edges, Dimas also loves editing to bring surprise to his sets and a few have made it onto white label. Playing live is another form of experimentation with his sets, getting creative with his own tracks to play them in a way never played before.

With EP’s on Bass Culture, Claap, Dame Music and One Records, Dimas kicked off 2013 with his debut LP. Released on La Vie En Rose, John Dimas proves he is very much part of an up-and-coming generation, pushing through with a new avant-garde house sound. 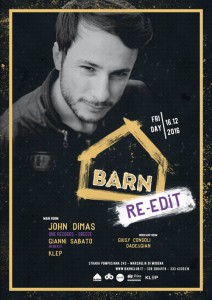