Nicola Zucchi is considered one of the most talented and promising Italian DJ. He Works in the best Italian and foreign clubs sharing the stage with the biggest international DJs (Avicii,Steve Angello,Axwell,Thomas Gold,Daddy’s Groove,Sebastian Ingrosso,Dirty South,Erik Morillo,Arno Cost,Norman Doray,Martin Solveig,Bob Sinclar,and many more).
His productions are played in various Radio Show and dj set from the best Djs of world fame.
After several years as a resident DJ in the legendary italian club PINETA in Milano Marittima,Nicola presents the new residence in two of the most important clubs of the whole peninsula: Peter Pan and Villa delle Rose in Riccione.
He is the protagonist of constant touring that bring him to the consoles of the best Italian and European clubs like Lio in Ibiza,Cavo Paradiso in Mykonos,Arc Club in Paris,Hollywood and The Club in Milan,Covo di Nord Est in PortoFino,Bilbò Club in Cortina d’Ampezzo, Country Club and Pepero Club in Costa Smeralda and many others!
He is also working with companies of fashion,design,fashion shows and from the exclusive venue to the underground clubs,from Art Basel Miami to Cannes Film Festival exclusive parties.
He is the resident dj of Palazzina Grassi in Venice during the Carnival week and Venice film festival.
It’s part of the production team Variavision,signed with many House Label.
On Summer 2013 and 2014 he open the VASCO ROSSI Live Kom Tour 2013,the most important Italian Singer and he plays in front 40k people.
On Summer 2014 presents a new dj set called SPARKLING ATTITUDE (A classic collection of the best Spark and Seductive Tunes) where he mix the disco classic and funk with new indie and nu disco tracks,from the house garage to the Chicago and Philadephia House. 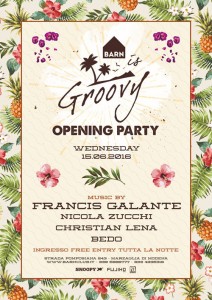